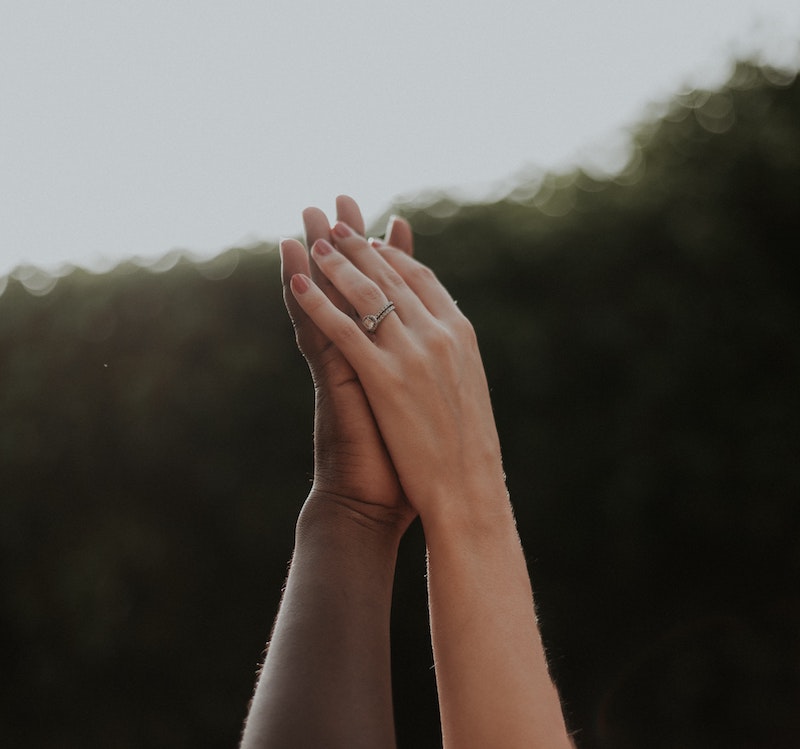 As an Aussie, I was never bound by the racial tensions and constraints I have witnessed in the United States, both through the news, and during time spent living in California. The search for love always seemed unrestrained and with endless possibilities of potential connection across any and all ethnic backgrounds or races. Yes, I am a Caucasian man, a ginger in fact.

One day, I met someone online that I instantly clicked with, and though she put her location as the Bay Area, she was actually living in Kenya, Africa, and planning a move to California to study at a San Francisco-area University. I really didn’t think twice about the fact that she was dark skinned, while I was white as snow. I thought she was beautiful and interesting, and she had my undivided attention. We started a long-distance relationship for six months before she actually arrived in California. By the time of her arrival we had become close and she moved in with me in short order. Meanwhile, Sam and I were working long arduous hours at our day job for a Silicon Valley startup. We desperately wanted to fire our boss and join forces to start our company, but we couldn’t decide what our company would be.In the early 2000s I had made my way from my home in Australia to California on a work Visa. I started a position at a Silicon Valley startup, alongside my buddy, Sam. It was early 2001 and I was only supposed to be stateside for a few months, though the two of us were enjoying our time in California and at the company, and we both decided to stay longer.  Upon my decision to remain in the Bay Area, I figured, “I’m a single guy. I might as well start dating.”  At the time, my only online prospects were Yahoo personals and Match.com, and after going on a few dates with some typical California girls, suffice to say, I didn’t really hit it off with anyone.

We were playing around with rubbish ideas and one of those ideas was selling African Tribal Masks inspired by my new amazing Kenyan girlfriend. I excitedly presenting the idea to her and she determined it to be bullsh*t. I think I even heard a laugh erupt from her. She then turned to Sam and me and said, “We met on Match.com. Why don’t you create a black and white dating site?” Bear in mind, this was the very early 2000s and our culture was not quite as open to interracial relationships as it is now. When I met my girlfriend, I wasn’t necessarily looking to date someone of a different race or different nationality, though free from the baggage that most Americans carry regarding race, I was open to just about anything and it just sort of happened.

Prior to meeting my girlfriend, I had reached out to and communicated with all sorts of women, including the blonde, blue eyed type. But I noticed, with the exception of my girlfriend, a few other times I reached out to black women, I was met with skepticism or rejection. Back then when I would reach out to women of other races, many times I would get comments like, “Step off white boy,” and that variety. It was not as common to reach out across racial lines, romantically, 15 or 16 years ago.

So, we ultimately decided, “Why don’t we make a dating website specifically for black and white people to meet each other?” It would be different in that it would be a safe and welcoming environment for people to connect with men and women of a different race who were open to dating interracially.

In the midst of all this, my relationship had ended, Sam ended up marrying a woman at the company we were working for, and I went back to Australia as a single man once again. But we were hopeful about our new idea for an interracial dating website.

How did we get it rolling? We placed an ad in a Kenyan newspaper and got a few thousand people to join from that one newspaper ad. One particular ad prompted a girl to join our site and she told her girlfriend about the site. Long story short, that is how I met my Kenyan wife.

A few months into our new venture I was out one night at a mate’s place and came home at midnight to check on our new, fledgling, website, AfroRomance.com. Lo and behold there was a profile that stood out to me, and that is how I met my beautiful Kenyan wife. We chatted until 3 am and had constant daily communication through Yahoo messenger, texting, email and web camera from the day we met. We started talking on November 26, 2004 and the conversation is still going strong. I went over to Kenya is May of 2005 and met her and her family. After daily communication for months with, both, her and her family, it all felt far from unnatural. We already felt like family.

We’ve come a long way since our original launch in 2004, both as a business, and as a culture. Our most successful site, InterracialDatingCentral.com, has millions of members from all corners of the globe and thousands of success stories pour in each week. We also have a thriving Facebook community with 2 million members who enjoy sharing personal stories about their interracial and inter-ethnic relationships, marriages, and families, as well as reading about the stories of other members. Most importantly, our Facebook community is a safe and supportive space for people to share their interracial love stories free from judgment or ridicule.

As mainstream as interracial relationships may seem in popular culture today, there is still a long way to go, especially in America, where a lot of healing has yet to take place. Our community is still very much needed. Why? Because every member who signs up and creates a profile on our site is essentially saying, “I am open to finding a connection regardless of the color of someone’s skin.” That is a powerful statement to make in our current world, and that is the statement being made when someone creates a profile on our website.

Like my wife and me, black women and white men are probably our most common type of match that is made through our community. Statistically speaking, black women have found online dating to be the most challenging, especially when they are open to, or looking to date across color lines. People also continue to need our community to date interracially because not every place is like New York or Los Angeles. Many of our members are in smaller towns in geographic areas where interracial dating is not as commonly available or socially acceptable.

My advice to anyone looking for love, especially in the challenging times in which we now life, would be to open your eyes and your heart to all the possibilities to increase your chances of making a meaningful connection.

Yes, our profiles are old school with our longer profiles and essay-style answers, but in our opinion, it is still much more effective than a few strategically placed selfies and a clever sentence or two. We go deeper into values, ideals, thoughts, and feelings that enable two people to connect and pre-qualify each other, based on the content of their respective characters.