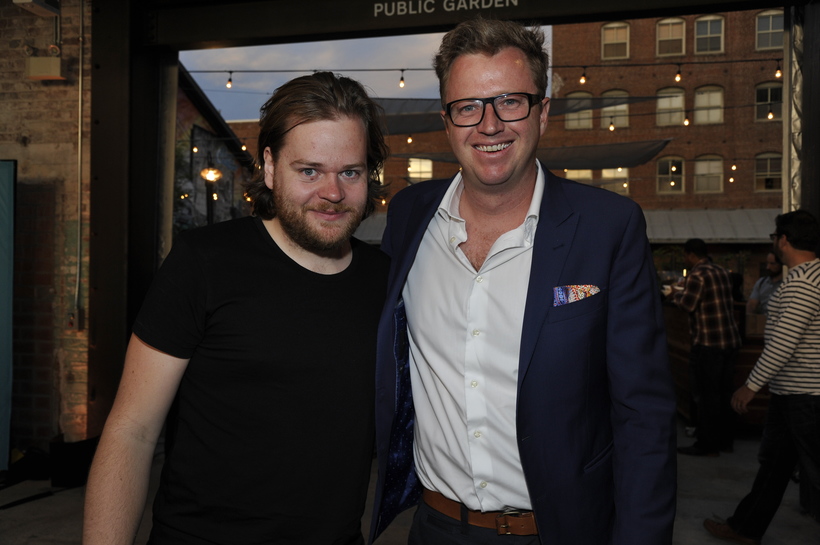 GC: What inspired you to bring the Food Bowl to LA? How did it all begin?

AD: Jonathan Gold was the inspiration. He was a guest at a festival I was working on in Sydney, and it sort of started from there. This whole idea of trying to do a festival that hasn’t been done before, that was different from everything else, that fit in with Jonathan, and that fit in with everything that was happening in LA. Los Angeles seemed to be a place that could make the whole idea of the story of the festival relevant. So, it has been about two years in the making. Everything in terms of the curation, which chefs were invited, and what the content could be has been very much built around Jonathan, the editorial team, and the LA Times.

GC: What was the effect of the blurring lines between the entertainment industry, food landscape, and celebrity chefs during the creation of the LA Food Bowl?

AD: One of the most important things when I first moved to LA was watching City of Gold. Seeing Jonathan in that film helped me understand the LA food scene a lot more. For a long time, the city of Los Angeles has been known as a film town, but food is becoming so central. Using film as the medium to tell the story of chefs and the food scene has really exploded, and it just made sense that we drew some attention to that. Not just the Chef’s Table, which is driven out of Los Angeles, but a lot of these other food films like Chef with John Favreau and Roy Choi are included in that. It made sense that those stories could be told. That was our opening event at the Wilton where we brought a lot of those chefs together.

If you talk to chefs like Massimo Bottura or Magnus Nilsson, being the in the world’s fifty best is amazing, but being in shows like Chef’s Table is what has completely changed the idea of a chef. It was blatantly obvious that there had to be a film element to the program. It wasn’t just that – we had Ulam, the preview of the Filipino Food Movement in the US, and we have a few other films besides that. We would like to do a lot more.

I guess it’s just year one of the festival. Jonathan probably had another ten films he would like to show, but in year one you want to have a program that people can comprehend. We have over two hundred events, which is a lot, but it could be much bigger. At this point in time, when you launch a new concept, people need to be able to grasp what it is. If you bombard them with too much information, it will be overwhelming. I think next year we’re going to have a lot more film perspective in the program – food films and classic films, but this is just one element.

GC: Do I hear a food film festival coming up?

AD: Well, food and film are both going to be combined in this one in the festival. We are focusing on so many different things, and that’s the concept of a festival anyway. There’s this idea that a festival is all one location, one weekend, but that’s not a festival. It’s an event. A festival is something that has multiple events, in multiple locations, touching on many different subjects, and that’s what Food Bowl is all about. So, yes there will be a festival within a festival. I think we have over 5 film events in the festival programming. Even with Food for Soul with Massimo Bottura, we’ve had his film Theatre of Life that followed the panel discussion. There’s at least 5 films within the program.

GC: Bringing this to the US, what are the challenges compared to organizing food festivals internationally?

AD: Skepticism in the food space and the creative space is the largest obstacle. People are naturally skeptical about new things, so there was a two-year process around convincing pretty much everyone and explaining the concept. To me, the concept seems pretty obvious. You go to Edenborough for the French festival, and it’s a town of roughly 400,000 people. There are hundreds of events happening in this small town in Scotland – the largest festival in the world. Yet, a city the size of Los Angeles doesn’t have a festival like this. Food is such a big unifier, and food is such a great demonstration of that culture. That was what City of Gold was all about. Without Jonathan Gold and the LA Times, the whole concept wouldn’t have been possible. There was a lot of pitching and selling the concept for people to believe this idea. Even though Chef’s Table is very popular, LA hasn’t hero worshipped chefs in that way, so it evolved. It wasn’t necessarily what it was going to be when it started. It adapted and evolved to try to be reflective of LA.

GC: Are you planning on taking this festival to other cities in the US? What would be your next stop be if you did?

AD: This festival is Los Angeles. The entire idea is LA, so this festival can’t really go anywhere. It can only be in Los Angeles. You might be able to take a similar model to another location, but everything is being tailored in LA. You might be able to have a similar festival in some cities, but I don’t think it necessarily works in NYC or elsewhere. The content, things in a bowl, the Food Bowl, all of the elements are driven around Jonathan Gold and the LA Times, and that’s all about Los Angeles. In that sense, it’s not a replicable model. There are events like Taste in London, and that goes to all these other places, but it’s a cookie cutter festival. For this festival to grow, it has to grow in Los Angeles. It’s huge. I mean LA is like 15 million people. You could have this night market in ten different places throughout the month of May. I’m just thinking about SXSW in Austin and how that place comes alive. It’s a town of less than a million people. Theoretically, there’s a lot of room to grow.

“A Bowl is a great unifier. So, the LA Food Bowl is all about bringing people together.”

GC: You mentioned the film element, is there a music element that’s attached to the Food Bowl?

AD: There’s some music element. At events like the Night Market, we have a lot of music. As far as this idea of an intersection of different creative strings – we have a photographic exhibition with Magnus Nilsson at Union Station. Music is one of those things, like photography, that definitely goes well with food. We were approached by a few big name bands and other people, but outside of having music at food events, there’s certainly no plan to have a music and food festival in that sense. The focus is primarily on food. A lot of chefs like music though. Massimo Bottura has a massive record collection and Jonathan Gold was originally a writer for Rolling Stone. But, I think we need to have some level of focus on food. Who knows? Ideas could come from it anyway. We’d probably have to do that more in the long term, though. I don’t think we’re trying to use music to sell our food event, which I think a lot of New Age food festivals are trying to do.

GC: Is there a vision for the festival for five years from now? What do you envision the festival becoming in the future?

AD: I guess it’s an iconic event on the LA food calendar. I would love to see it become the best festival in America and potentially globally – to put LA on the map from a food perspective more than it already is. It will be important in building those relationships with the international community to come to LA and celebrate LA from a food festival perspective. From a sheer numbers perspective, we had over 200 events this year, but I think you could have over a thousand events. You could really have multiple Night Markets. We only have a plan, at the moment, to improve what we’re doing through the learnings of this year. We’re only half way through. We’re still learning, and at the end of it, there are so many more ideas that people want to do. We don’t want to grow for growth’s sake – I think we just want to do a really great festival with interesting things that the industry has respect for and the public finds interesting. That’s unique because there’s a lot of food festivals and a lot of music festivals bringing food into it. And, one of our tag lines is “a new kind of food festival” – trying to do something new and different. Authenticity gets used a lot in the world of food these days, but I guess that’s what we’re also trying to do.

Original Post: Angus Dillon on Why Los Angeles is the Perfect Spot to Host Food Bowl