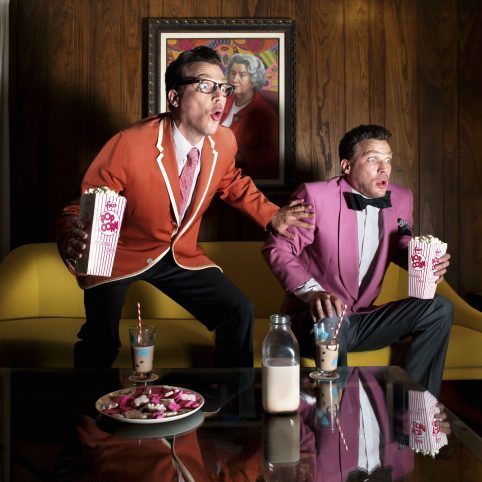 A. So we draw and caption an original cartoon a day. It’s really whatever we happen to be thinking about that day. Like healthcare policy, or the environment…. or a talking butt. Usually it’s a talking butt. Looking through our work is sort of like taking a trip into our brains. We get why a lot of people would prefer going to Paris or Rome or even Bakersfield.

Q. How did you guys start collaborating?

A. Well, as identical twins we’ve sort of been collaborating since we were in our mother. What’s funny though – and this might be true of a lot of twins – is we went through a long phase of compensating for our “twininess” by constantly asserting our “individuality.” Basically, we latched on to every microscopic difference between us. “I play flute, HE plays oboe. GET IT RIGHT!” It took us a long time to accept the fact that we’re actually not individuals and once we did that things sort of clicked.

Q. So was Instagram the first thing you started working on?

A. No, we started by creating television shows, usually animated adult comedies. We’ve sold a few shows and recently finished one about our High School years starring Kesha and Ron Funches called “Highly Gifted.” But what we like about posting on Instagram is that whatever we dream up – as stupid, and crazy and moronic as it might be – that’s what we post. There’s no executive looking over our shoulder asking, “Is the character in this cartoon sympathetic enough?” Or “Why animated??” Fuck off. For better or worse (okay, mostly for worse) we’re the creators, executives, and business development team on this. Oh, and also the guy who runs the copy machine. So there’s no filter or “comedy condom” between us and our audience. Just raw bareback Lehrerboys humor. We’ll wait for you to throw up before we move on to the next question.

Q. What made you guys decide to do single panel cartoons?

A. Growing up, we always loved the Sunday Funnies. We used to run around the house fighting over who got to read them first. But then along came Al Gore and he invented something called the information superhighway and print media and the Sunday Funnies became less of a thing. When Instagram came along, it just seemed like a natural delivery mechanism for single panel cartoons. We draw together, write together, and we’re both idiots. It just sort of fell in place from there.

Q. What’s a typical day like for you guys?

A. A typical day begins with the two of us getting in to the office bright and early and sitting down and immediately getting up and taking a walk to get coffee. We then get back in the office and really knuckle down into a nap to “get the creative juices flowing.” After that, we have a meeting where we talk about establishing new processes for improving efficiencies in our production. Then of course comes lunch and another nap. Finally at 4:55 we both draw frantically for about five minutes.

Q. So do you guys make a living from you cartoons?

A. Yes, yes, of course. To paraphrase Groucho Marx, we can make a living from them as long as we don’t draw too often. We actually do have a line of apparel ranging in style from slightly inappropriate to extremely inappropriate at www.lehrerboysshop.com. We should also mention that all profits go to our nonprofit, The JDLSF (the Jeremy and Daniel Lehrer Support Fund).

Q. Tell us something no one knows about you.

A. We would but we don’t know it either. If we ever do, we’ll definitely tell you first. Although then it won’t be something no one knows anymore… we don’t think there’s any way to answer this question.

Q. What are the future plans for the Lehrerboys?

A. Oh, it’s very exciting – we’re actually not supposed to get into it – but let’s just say it involves a walk, a coffee, and a nap.

You can find more photos and upcoming TV news about Daniel & Jeremy Lehrer at www.LehrerBoys.com and on Instagram @LehrerBoys. The Lehrer Boys are represented by CAA and Principato Young Entertainment.